Most of the ideas in this post come from the book Being A Dog: Following the Dog Into a World of Smell by Alexandra Horowitz, which is my favorite nonfiction book I’ve read in a long time. She, in turn, took much of what I discuss from Kate McClean, an artist who makes sensory maps of urban environments. But this is certainly my own take, and the instructions as I present them are at times in conflict with what I think each of those people would suggest.

Smelling is a skill. Unless you make perfume for a living, you probably don’t know how to smell. Here are what I consider to be the basics of good olfactory practice. 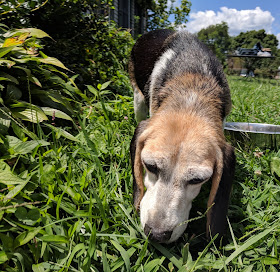 Now that you know the basics, try going for a smell walk. A smell walk is just a walk, but instead of looking at stuff all the time, you relate to your environment primarily through scent. Here are a few more tips for smell walks in particular.

I really enjoy smell walks. They feel indulgent and exciting to me, and I love watching the constant discovery and surprise of my friends when I bring others along. There’s a lot of intimacy in smelling.

I’ve done enough smell walks in my neighborhood that I think I can probably estimate my location to the nearest street corner (maybe better) just by smell, if I’m within a few blocks of my house. I think my nose is about as good as average, based on my experiences taking people on smell walks. If that sounds unlikely to you, you’re probably drastically underestimating how good you are at smelling. Humans have much better noses than they tend to think.

Scent is so neglected in human experience. I think it’s largely because we walk on two legs, and use our hands to examine things. We just don’t spend much time down where the smells are.

It makes me sad, because there’s a whole world of olfactory experience that’s never instantiated. If I ask someone about their day, people will tell me what they saw, and maybe what they heard, but almost nobody tells me what they smelled.

And if someone does mention smell, it’s almost always because something smelled either disgusting or delicious. The world is so full of smells, of so many kinds, but hardly anybody notices. I’d like it if more people engaged with the world through scent.